Disklavier is much more than the modern-day version of the “player piano.” Disklavier pianos are authentic acoustic pianos that incorporate fiber optic sensing systems, high-performance solenoids, and state-of-the-art computer technology.

These pianos can very accurately record piano performances and playback with all of the expression and nuance of the original performance. These instruments have many capabilities that provide a wide range of entertainment and educational uses. 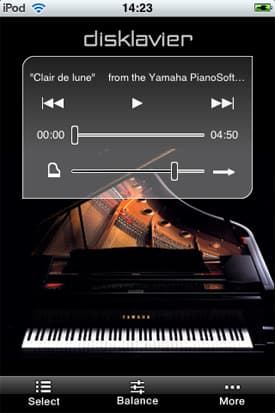 Yamaha’s free Disklavier App introduced last June for Mark IV and E3 model Disklavier pianos. The app enables WiFi remote control of the instrument using an Apple iPod Touch, iPhone, or iPad. At the touch of a button on any of these devices, the user can control many Disklavier performance functions, including selection and playback of sources, albums, and individual songs; volume, basic record and song titling, balance, transpose, and part cancel.

Also, the App can be used to control the playback of DisklavierRadio. DiskalverRadio is an unlimited, subscription-based service that lets users listen to hundreds of fully orchestrated songs 24/7 over the Internet, which are then performed “live” on the Disklavier.

“Yamaha’s goal is to make it as convenient as possible for Disklavier users to control and enjoy their instrument,” said Jim Levesque. Levesque is the Disklavier Marketing Manager, Yamaha Corporation of America. “Since many of our users already own an iPhone, iPad, or iPod Touch, now they can simply reach into their pocket, open our app and immediately enjoy any performance from anywhere in their home.”